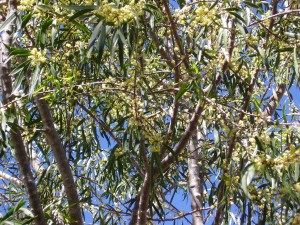 Gumbi Gumbi is a native tree growing in a small area of Central Queensland and in a narrow band stretching across to Western Australia. There are 6 varietys only one of which has medicinal properties. In its natural environment the medicinal variety of Gumbi Gumbi is scarce due to wildlife and livestock instinctively sourcing it to benefit from its healing properties. Gumbi Gumbi is known by a variety of names including: Gumby Gumby, Cumbi Cumbi, Native Apricot, Cattle Bush and Bitter Bush. The Gumbi Gumbi fruit is small, orange and looks similar to a tiny apricot, inside is about 8 seeds covered in red flesh. The flowers are tiny yellow star shaped which attract both native and European bees.

University Studies undertaken in Germany concluded that extract from Gumbi Gumbi leaves is a very powerful anti cancer agent.  We have learned from customers taking Gumbi Gumbi that it has helped with a wide variety of cancers including skin cancer, melanoma, prostate cancer, leukaemia, just to  mention a few. Some of our Prostrate cancer customers have reported to us that Gumbi Gumbi has assisted in giving them a clean bill of health from their Doctor, with some doctors even suggesting to these patients to seek out and try Gumbi Gumbi for the treatment of their cancer! Taking Gumbi Gumbi daily can boost the immune system there by preventing colds and flues and help sustain health and well being.Aboriginals were the first to use Gumbi Gumbi, they discovered it was useful for a mired of ailments  including: skin disorders including skin cancer, psoriasis, eczema, acne a tonic for colds and flues, anticonvulsant and treating cramps and pain, antimflamitary, convulsions, depression chronic fatigue.

Gumbi Gumbi is very simple to take in its natural form as naturally dried leaves infused into a tea, it has a bitter taste that can be disguised by mixing it with your regular tea for a pleasant unique taste. Alternatively for those wanting to treat more serious diseases a juice can be made by simmering leaves in a saucepan of water to make a more potent infusion of which portions of around 120ml is taken daily.

Word is spreading on the therapeutic values of Gumbi Gumbi, many testimonials can be found on the web from people who have benefited from this marvellous plant native to our country.

NB: As with all herbs, care should be taken in consuming these natural products and taken at own risk. This information is not intended as a substitute to medical advice and should never be taken as such.